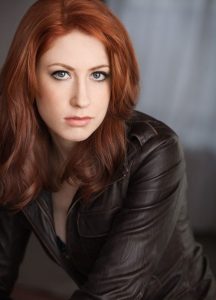 Holly Stevens is an award-winning actor, as well as a television host, writer, and producer. Her feature film credits include Aliens With Knives, The Last Divide, Shadow in the Mirror, and Creepy Crawling, while her television credits include hosting  Ghost Cases in 2008-09, and her current series Haunted (writer / host), now in its third season, and Slainte (writer / producer / host), which has just completed its first season. She is currently a member of the Board of Directors of WIFT – Atlantic (Women In Film and Television – Atlantic).

Holly graduated with a B.Sc. from Acadia University, and then went on to Vancouver, where she earned diplomas in acting for film and television from School Creative, and in medical laboratory science from the British Columbia Institute of Technology. Originally from the Annapolis Valley, she currently lives in Halifax.